This client is an influencer and has built a very admirable personal brand. All the important information has been (blurred or slightly adjusted) to protect her privacy.

This project needed to leverage that to bring her old and successful campaign back to life. She was able to get a 2x return for a short period of time and then the ads and audiences have burnt out.

These numbers tell only half of the story.

Also for some reason FB is off by about 30% from the stripe revenue. They are not counting a lot of their own sales.

I tried to fix this moving forward but with everything set up correctly we were still off and had to go by the Stripe data.

March and April were real good months for her… and then things stopped.

She hired a non-specialized FB advertising agency in May and was becoming very frustrated. Seeing her campaigns I understood why. They created a couple of audience lookalikes and left it at that. They weren’t breaking even and charged a lot for their services.

I often mention the following to my potential clients: “There is a reason why I am not a good fit for most businesses… I don’t know nor understand their industries… and is why I only focus on marketing online courses.”

The first thing we did was fix the speed of her Webinar opt-in.

My goal was to get it in the 1 – 1.5 second range but this is impossible with Clickfunnels as their software is bloated and leaves very little control for the user. Every half a second of improvement will raise your conversion rate so even this was worth it.

Our plan of action:

We analyzed the entire funnel.

Set up a couple of targeted audiences and lookalikes with constraints. Created copy variations and ad image variations. Ran a ton of split tests.

The goal was to get the cost of the traffic down and then start scaling on the winners.

No rock was left unturned.

A lot of things failed but a couple showed real promise.

Now we had some low cost campaigns (not one but a few) which we could use with precision to drive cold traffic and get sales.

Our main goal was to get the remarketing right as that part was completely missing from the campaign.

This is how we decided to set it up

In RM6 we asked them directly… Why didn’t you buy? 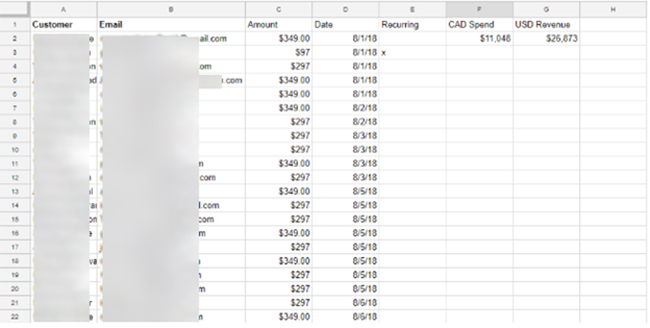 After only 60 days of work the campaign was back to its overall 2x return and climbing higher.

Most of the campaigns that come my way only drive cold traffic to their webinar or click bait. This is fine but not optimal. Often the most one will achieve with this method is a 1 to 1.5x return. Remarketing can often do 4-8x. It is the single most important overlooked method of having FB (or any other ppc) advertising work for you.